Your triptych is most certainly a fake. A note from the premier expert on the early Netherlandish master Hans Memling seemed to confirm what the curator’s discerning eye had already suspected about the Virgin and Child with Donors triptych. The Virgin and Child with Donors triptych entered the collection of the Palmer Museum of Art in 1999 as a generous donation. Friedrich G. Helfferich– who during his tenure as Professor of Chemical Engineering at Penn State made profound contributions to the field with his first book Ion Exchange in 1962 – gifted the triptych that had been acquired by his family in Berlin sometime in the 1930s. A prior appraisal identified the piece as the work of the early Netherlandish master Hans Memling, or a member of his studio. With a complete provenance and no reason to suspect forgery, an appraiser with a generalist specialty would not have pursued further examination by a Memling specialist. Helfferich’s donation of the work to the Palmer Museum of Art initiated a series of standard procedures for accepting a gift, according to the guidelines set forth by the Art Dealers Association of America, which included an additional appraisal.

Maryan Ainsworth, an expert in early Netherlandish painting, performed the necessary study to inform the appraisal for the ADAA. Ainsworth pioneered interdisciplinary methodologies for technical art history at the Metropolitan Museum of Art in the Paintings Conservation Department and currently holds the position of Curator of Northern Renaissance Painting at The Met. With her expert eye trained on a transparency of the triptych, held aloft to catch the light in the Thomas J. Watson Library of The Metropolitan Museum of Art, Ainsworth became curious about the work that claimed to be by the hand of Hans Memling. A number of inconsistencies betrayed its falsity. Once appraised, the triptych entered the permanent collection of the Palmer Museum of Art, its true origin still unknown. Sensing that the Palmer Triptych was part of a larger story about the technical analyses that offer insights into working method and materials, and the ways this nascent application of technology can inform questions of attribution and dating, Ainsworth invited the Palmer Museum to bring the triptych to New York for further study. The succeeding investigation into the authorship of triptych contributed to a growing field of scholarship on technical analyses of art works and became a significant piece of the puzzle that helped expose a prolific forger. (See: Ainsworth, “Implications of Revised Attributions in Netherlandish Painting,” Metropolitan Museum Journal 27 (1992).

Methodical connoisseurship detected incongruity of the Virgin and Child type, unusual iconography, anachronistic details, and an uncharacteristically disjointed interior space. It was clear that the triptych is atypical of early Netherlandish painting, in both iconography and style. The clumsy combination of fifteenth- and sixteenth-century models for figure groups and gestures, combined with iconographic confusion, spatial incongruities, and anachronisms speaks to the triptych’s misattribution. Ainsworth and her colleagues turned their attention to the physical evidence to confirm what they already suspected.

Close examination of the object and its materials began with technical studies of the painted surface. Infrared reflectography revealed a flat paint layer structure rather than the transparent layers characteristic of fifteenth-century paintings. Flat, opaque layers generally indicate the presence of modern pigments. X-ray spectrometry confirmed that the pigment composition in question was not typical of fifteenth-century Netherlandish paintings. Ultimately, technical analyses offered a better understanding of the physical and chemical qualities of the work that are uncharacteristic of true early Netherlandish works, including lack of under-drawing, flat paint layer structure, and the presence of lead white pigment. Finally, Ainsworth contacted an expert in dendrochronology to study the ring structure of the wood panels. Dr. Peter Klein of the University of Hamburg examined the oak panels and determined that the wood was not quite old enough to have been done by Memling or a member of his studio.

Armed with a more complete picture of the stylistic and material nature of the triptych, Ainsworth and her colleagues confronted the question of authorship.

Intimately familiar with the collection of Flemish Primitives at The Metropolitan Museum of Art, Ainsworth noted the striking resemblance between the Virgin of the Palmer Triptych and a Virgin and Child panel produced in the workshop of Hans Memling in the late fifteenth century. Ainsworth reasoned that this authentic work likely served as a prototype for the Palmer Virgin. A trusted provenance indicated that The Met panel had “passed through the art market in Berlin” in the early twentieth century (Ainsworth, 23).  Given that the Palmer Triptych was acquired in the same city around the same time, Ainsworth pursued a connection to Berlin by searching for more prototypes in Berlin collections. At the Gemäldegalerie Ainsworth discovered a model for the Christ Child in a sixteenth-century Joos van Cleve Virgin and Child. Having been on view at the Kaiser Friedrich Museum in Berlin after 1904, Ainsworth concluded that the forger may have been familiar with this composition. The inelegant conflation of two incongruous prototypes found in Berlin in the first decades of the twentieth century – Memling’s fifteenth-century Virgin and Joos van Cleve’s sixteenth-century Christ Child – suggests that the artist responsible for the Palmer Triptych was similarly connected to the art market in the early twentieth century. (See Ainsworth, Caveat Emptor, 23). 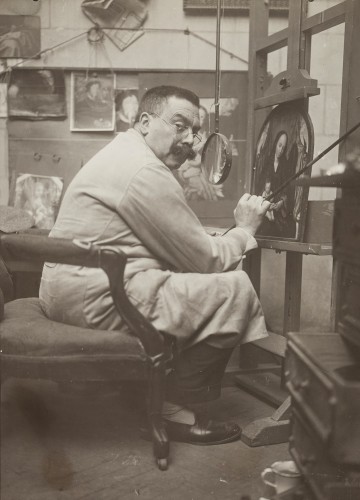 Van der Veken at work in his studio. Image: CODART.

A prominent art restorer with a notoriously heavy hand, Jozef (Jef) van der Veken (1872–1964) earned a reputation for his skillful restorations of fifteenth-century Flemish masters, including Jan van Eyck and Rogier van der Weyden (Charney, The Art of Forgery, 51). Early twentieth-century art restoration differed from current conservation ethics and best practices which seek to preserve without altering (See: Titika Malkogeorgou, “The Ethics of Conservation Practice: A Look From Within,” Victoria and Albert Museum Conservation Journal 52 (Spring 2006)). Van der Veken often blurred the line between restoration and forgery with his hyper-restorations, “the reconstruction of whole paintings from mere fragments or extremely damaged pieces,” such that the viewer is unaware of the hand of the restorer (Thierry Lenain, Art Forgery, 247). His skill in imitating historical techniques became a lucrative business when Van der Veken opened a shop in Brussels, trading in disingenuous antiquities (Lenain, 247). Around 1920, Van der Veken teamed up with Emile Renders, a Belgian banker and private scholar who assembled an impressive private collection of Flemish Primitives. Renders financed Van der Veken’s hyper-restorations, encouraging him to acquire damaged paintings and restore them according to modern tastes. These “restorations” involved scraping off areas of original work and painting them anew. A number of these Van der Veken “restorations” found their way into Renders’s own collection, which became a sensation when it was exhibited in 1927, celebrated for its never-before-seen Flemish masterpieces (Fry, “The Authenticity of the Renders Collection,” 261). The integrity of Renders’s collection was questioned almost immediately by shrewd connoisseurs who recognized the skillful methods of deception (Fry, 261). Van der Veken’s methods of hyper-restoration were revealed, though the extent of his duplicity remained hidden until the 1990s when experts like Ainsworth and her colleagues began assembling the pieces of a much larger puzzle.

A significant discovery was made in 1992, when The Metropolitan Museum of Art unearthed from storage the Man of Sorrows panel for technical analyses, “with some surprising results,” (von Sonnenburg, “A Case of Recurring Deception,” 8). Purchased at auction in London in 1974, the Man of Sorrows panel was quickly declared a “modern forgery beyond doubt,” after examination by The Courtauld Institute of Art (von Sonnenburg, 12).  A 1992 lecture series, “Understanding Fakes,” offered an occasion to re-investigate the spurious panel with the same techniques used on the Palmer Triptych, which revealed extensive modern additions to the authentic fifteenth-century panel.

Improved methods of technical analysis enabled museum curators and conservators to interrogate other questioned paintings, and the full scope of the restorer’s deceit became clear. In 2004 an exhibition at the Groeningemuseum in Bruges, Fake/not Fake, explored the misattributions, copies, hyper-restorations, and outright forgeries of Van der Veken. Informed by the Van der Veken archive and research conducted by professors Roger Van Schoute and Hélène Verougstraete of the Laboratoire d'étude des oeuvres d'art par les méthodes scientifiques at the Université Catholique de Louvain, the exhibition probes the complexities of attribution and sparks a larger discussion about authenticity, conservation, and museum collections. (Codart)